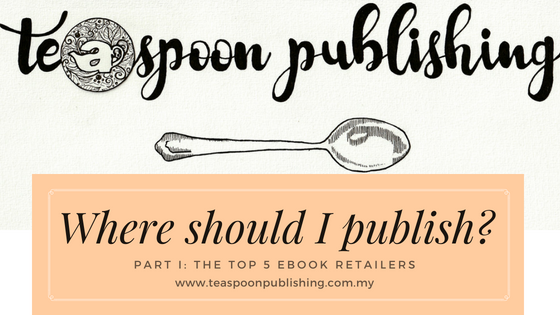 Now that you’ve decided to self-publish, the next question is: where should I publish? Here’s a quick look at the top 5 ebook retailers and how accessible they are to Malaysians.

Amazon Kindle is undoubtedly the biggest player in the ebook world at the moment, especially in the United States of America. As much as some publishers hate Amazon and its near-monopoly, it’s still a publishing heavyweight that is ignored only at your (publishing) peril. Most self-publishing success stories are geared around aggressive marketing strategies on Kindle and Kindle Unlimited.

For Malaysians, the downside to publishing on Amazon is really that the average Malaysian is not going to be able to buy your ebook because there is no actual Malaysian Amazon market. Most Malaysian who buy and download from Amazon either do so with a US-linked account, via gift cards, or through a VPN. And frankly, only very dedicated, avid readers are going to bother with this.

The other downside is that your royalties are subject to a 30% withholding tax because Malaysia does not currently have a tax treaty with the USA. You’ll also need a US bank account (or a bank account in one of the countries Amazon has a presence in) to receive your royalties via direct debit. Without this, you’ll need to accumulate a total of $100 sales in each respective currency in order to receive a cheque.

Publish on Amazon, by all means, but don’t expect to grow much of a local following from it. You’ll be mainly targetting the US/international market. Also, unless you use a banking service such as Payoneer, it might take an extremely long time to receive royalties.

Your best bet is to distribute to Amazon via an aggregator, which we’ll talk about in our next post.

Google Play’s sales of ebooks are apparently pretty low in the US. However, reports seem to show that it has a bigger worldwide market share and is still considered one of the big 5 online publishing platforms. Back when I had an organised book page via Pronoun (as opposed to my haphazard website now), half my sales were from Google Play so don’t let the poor reports from the US discourage you.

Malaysia is on the list of markets where Google Play is accepting new publishers. To open a publishing account, you fill up a form and wait for them to approve you. Uploading to Google Play requires a little technical know-how—they only accept uploads in ePub format so you’ll either have to figure out how to create an ePub file or pay someone to do it for you. AND because you’re registering directly as a Malaysian account, royalty payments can be made directly to your local bank account and there is no withholding tax.

Google Play doesn’t play well with aggregators, so this is one you might want to upload on your own.

Whilst Google Play isn’t quite as big on the ebook front as Amazon, it’s easily accessible by anyone in Malaysia with a smartphone. Also, no hassle with filling up US tax forms or figuring out how to actually get your royalties! You should register for a publishing account as not many aggregators distribute to Google Play.

Kobo (also known as Rakuten Kobo) is another popular ebook site. The plus side about Kobo is that they sell internationally, so it’s accessible to Malaysians. We can’t comment on the publishing side of it as we don’t upload directly to Kobo—we usually distribute to Kobo via Smashwords, or previously, the now-defunct Pronoun.

Whilst we can’t comment about selling on Kobo independently, quite a few aggregators include Kobo in their list of platforms. We’d list this as a must-have, seeing that it sells internationally, including to Malaysia.

iBooks is accessible to all Apple users worldwide. This means that anyone who has an iTunes account in the world can buy your ebook. Unfortunately, most people in Malaysia only associate iTunes with music, so their ebook market isn’t as huge as it could be.

iTunes is also horrendously glitchy when trying to find the actual LINK of the ebook to share, so we don’t use it much. Case in point: the link above points you to Anna’s author page because there is no actual link to an iBooks store. Links to iTunes also force you to open the iTunes player (and often tells us that we don’t have one even when we do) and all purchases need to be in-app, so we don’t really favour them as a buyer. Still, it works for those who do everything on their iPhones or iPads.

Again, we can’t comment on the publishing side of it as we don’t directly upload to Apple/iBooks.

Whilst we can’t comment about selling on iTunes independently, quite a few aggregators include Apple in their list of platforms. We’d list this as a must-have, mainly because it’s Apple.

Barnes and Noble has been rumoured to be closing down for something close to the last five years, so it seems like they’re a little troubled. All the same, it’s still considered one of the big 5 in ebook retailing. On the surface, Barnes and Noble appears to be accessible internationally, until you get to the payment page—where they require a US credit card to make purchases. So no, they’re not actually available to the average Malaysian.

Again, we can’t comment on the publishing side of it as we don’t upload directly to Nook/Barnes and Noble.

Whilst I can’t comment about selling on Nook independently, quite a few aggregators include Barnes and Noble in their list of platforms. We’d list this as “Not really required, but eh, why not?” at this point of time.

Malaysia has its very own ebook platform! Obviously, it’s not part of the top five ebook retailers in the world, but it’s been around since 2010 so it’s worth looking into. E-sentral caters to the Southeast Asian market, primarily Malaysia, Singapore, and Indonesia and is open to publishing in English, Malay, and Chinese.

We can’t comment much on the platform as a whole at this point since we’ve only just started trying to upload to the site, but our experience at this moment is as follows:

Update: check out how to upload to e-sentral here.

Malaysia boleh! But other than that, it’s a good way to try to build your local readership. We’ll let you know how this goes once we actually get our books on sale.

We’ve looked at the top five e-book retailers (plus e-sentral) but, as mentioned, we also sell through to these platforms via aggregators. Our next post will look at the various aggregators/distributors such as Smashwords and Draft2Digital, how they work, and whether they’re worth using. If you have tips to share, let us know in the comments.

P/S Here are some additional posts that you might find helpful: